In the 65-year history of the Harley-Davidson Sportster, there was really only one major design change. That was the aluminum-head Evolution engine, commonly known as the Evo Sportster. 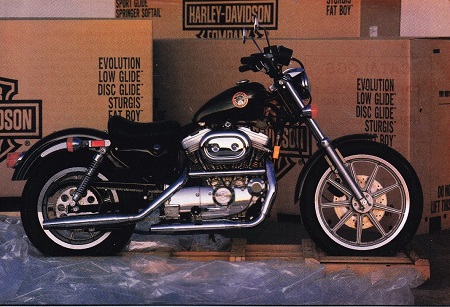 This article covers Evo Sportster history from 1986 to 1995

The Ironhead Sportster, arguably the greatest-sounding V-twin motorcycle ever, enjoyed a 28-year production run. But consumers wanted more power and less maintenance. The original Ironhead design was nearly at it's limit with horsepower. Of course, there were 70hp and even 80hp Ironheads running on the streets, but these were highly modified bikes that traded power for day-to-day reliability.

The new motor was built on the same 45-degree V-twin, four-cam, air-cooled, pushrod engine platform as the first Sportster introduced in 1957. Along with reliable power, it was designed to give riders what the old Ironhead couldn't; reduced valve train noise, quicker and quieter gear shifts, and a smoother and lighter hand clutch pull.

First-year Evo Sportsters were offered in two engine displacements. With a cylinder bore diameter of 76.2mm, the 883cc engine was the same size as the original Sportster, as well as it's predecessor, the 1954 Harley K-model.

One of the biggest design upgrades was the new aluminum alloy cylinder heads. Along with larger valves, the combustion chambers were reworked for a more efficient port profile. Not only did this add power, it helped the Evo run cooler and "cleaner" than the old Ironhead models. 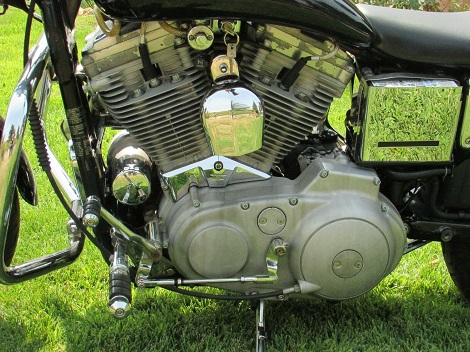 Although robbing the engine of a little horsepower, hydraulic lifters replaced the Ironhead's solid lifters. This allowed the valve train to run quieter and eliminated periodic valve adjustment. 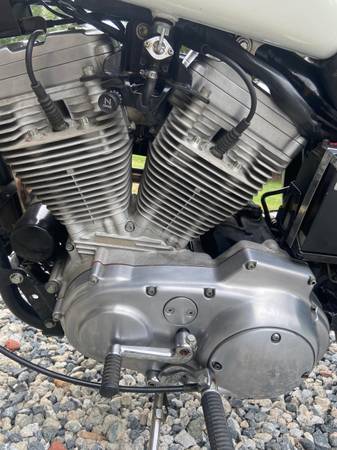 An Evo Sportster motor is about 1.5 inches taller than an Ironhead engine.

Basically a carryover from the 1982-1985 Sportster, several minor tweaks to the frame included a revision to allow the rear cylinder to be removed without removing the engine from the frame. Starting with the XLH-883, Sportster frames were powder-coated instead of painted.

Early Evo motors were bolted directly to the dual-downtube, steel cradle frame. Sportsters would not see rubber engine mounting until 2004.

Front suspension remained 35mm Showa forks from earlier Sportsters. An 11.2" disc brake was fitted up front and in back. Although wire wheels were still available, most buyers chose alloy wheels, which were 19" in front and 16" in back.

To commemorate the 100th anniversary of the Statue of Liberty, a "Liberty Edition" Sportster was available in 1986. Offered only on the 1100, special Statue of Liberty graphics adorned the gas tank and front fender.

As 1987 was the Sportster's 30th anniversary, a special edition XLH-1100 was offered. Harley-Davidson special edition models came from the factory with a certificate of ownership.

Unlike Harley Big-Twins, a Sportster transmission is housed inside the engine cases. The four-speed unit design dates back to the 1952 K Model, and continued in use until 1990.

The four-speed was updated to a much-needed five-speed transmission in 1991. Also this year, belt drive replaced chain drive on 883 Deluxe and all 1200 models. By 1993, all Sportster models were belt drive.

In 1981, the Ironhead Sportster was updated to a Nippodenso (not Nippondenso) starter, which proved so reliable that all Evo Sportsters through the 2012 model year were fitted with one. 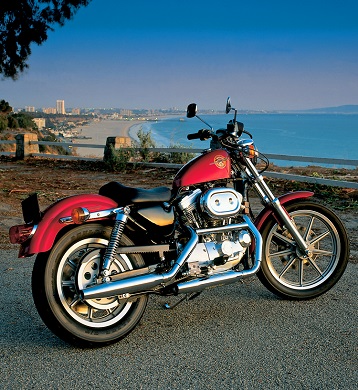 In 1995, the Sportster's mechanical speedometer was replaced with an electronic unit. A new vacuum operated fuel valve was fitted to the left side of the gas tank. Because of this change, the ignition switch was moved to the steering column.