Through normal use and wear, engines with solid lifters require periodic adjustment. If your Ironhead Sportster is not starting or running poorly, it could be the valves are not fully opening or closing. 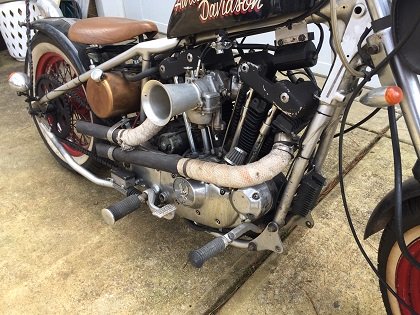 What Is Valve Clearance?

All Sportsters have four cams, located in the right-side engine case. Above each cam is a lifter (also called tappets) which sit below each of the four push rods. Valve clearance is the space between the top of the lifter and the bottom of the push rod.

Why Valve Clearance Is Important

If a valve doesn't have enough clearance, it doesn't fully close. This allows some compression to escape through one or both valves. Aside from losing power, the affected valve(s) may become overheated.

If a valve has too much clearance, it doesn't fully open. This robs the engine of power.

Mechanically, Ironhead Sportsters remained much the same through their long 26-year production run. All years and models have solid lifters. Adjusting valves on a late 50's or early 60's bike is the same as on 70's and 80's bikes.

Do I Need A Work Stand?

Having a motorcycle lift stand is a great time (and back) saver, but most Ironhead maintenance can be done "old school" (you crouched on the floor).

Valve clearance is measured when the engine is cold, and when each lifter is at it's lowest point (when that particular valve is closed).

Adjusting valves requires slowly turning the flywheels, which turns the cams, which moves the lifters into the up or down position. The engine will need to be rotated approximately 6-12 times during the valve adjustment procedure. There are several ways to do this.

Method One: If your bike has a kick-start, you can turn the motor over with the kick pedal.

TIP: Rotating the engine is much easier with the spark plugs removed.

Method Two: For non-kick start bikes, you can raise the rear wheel off the ground an inch or two, then with the bike in gear, turn the rear tire by hand. This will allow you to slowly move the flywheels/cams/lifters.

Method Three: On the 1981 Sportster in the pictures, the motor is a fresh rebuild, and I'm purposely adjusting the valves before re-installing the clutch cover. This allows access to the front motor sprocket nut. 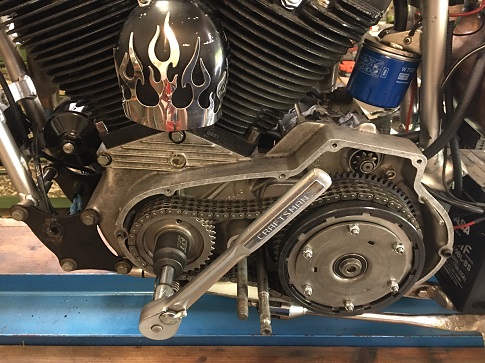 If you've worked on an Ironhead Sportster before, you know there are plenty of specialty tools. Before I had the proper tool, I was using a screwdriver to hold down the push rod tube with one hand, then trying to remove the spring cover with the other hand while under tension. If they are not under considerable tension, the inner tube springs may be worn, which would allow oil leakage. 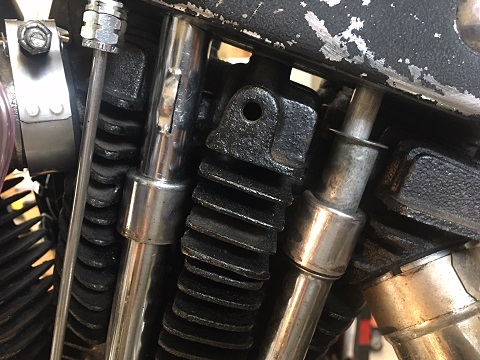 If you're not super careful, the screwdriver may scratch the chrome covers.

The Motion-Pro push rod tool removes and installs push rod tube clips with no hassle. The flat portion of tool fits under the cylinder head, and the cupped end fits over the bell in the tube. 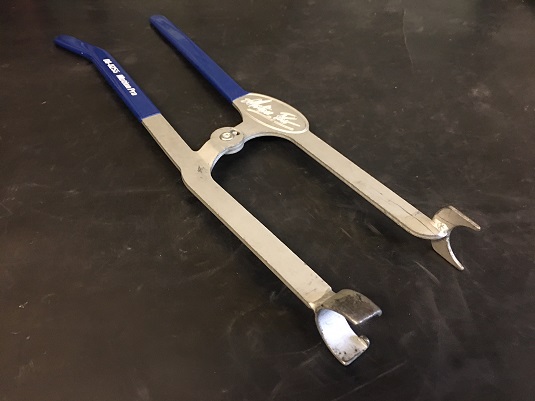 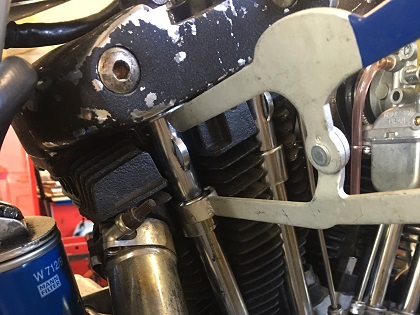 When you squeeze the tool, the spring compresses, and allows easy access to the spring cap retainer. Installation is just as easy.

You'll need a way to hold up the lower tubes up and out of the way while checking and adjusting valve clearance. 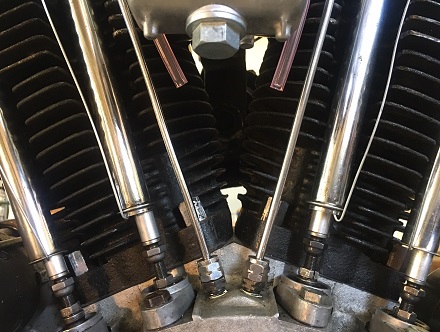 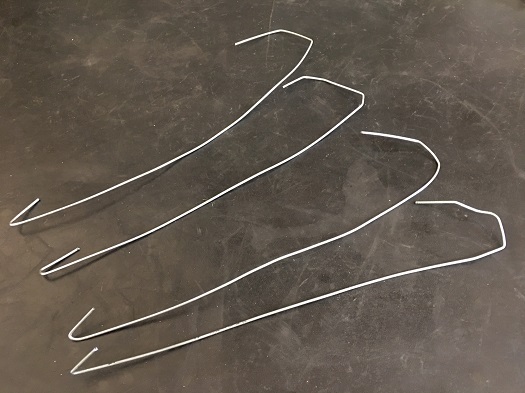 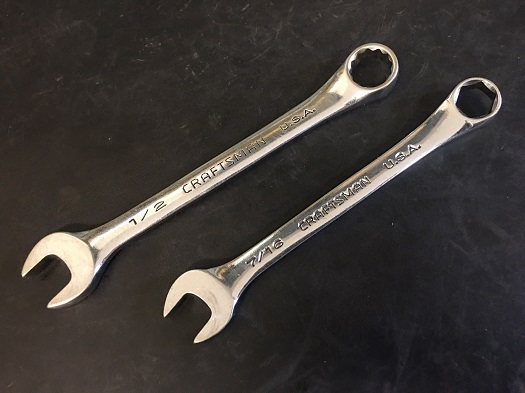 The following is essentially the method laid out in the factory service manual. Remove the spark plugs. Removing the air filter may give you more room to work.

Turn the engine slowly and watch how the lifters move. After you do this several times, you can anticipate when the cams/lifters will go up and down.

Intake valves are those nearest to the carburetor, exhaust valves are furthest. When a tappet is fully open, the corresponding tappet on the other cylinder will be fully closed. For each tappet you adjust, you want it fully closed (at it's lowest position). 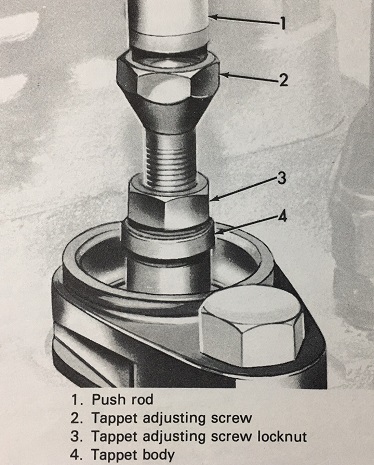 Feel for 'up and down' play in the push rod with your thumb and index finger. The push rod should turn right to left (back and forth) smoothly with no binding. 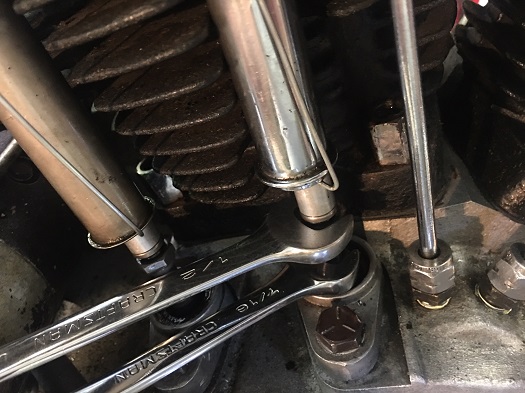 When correctly adjusted, the push rods rotate freely with any binding. There will be no up-down or side-to-side movement.

If an exhaust valve is adjusted too tight, it could burn a valve. For this reason, some tuners leave the exhaust slightly loose.

When satisfied with the results, tighten the lock nut. 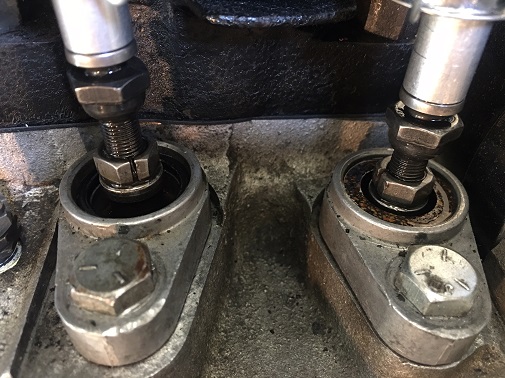 The factory torque spec is 8-10 ft/lbs against the tappet body.

NOTE: The lock nut purposely has a cut in it.

Check the push rod play once again after tightening, as it sometimes changes. I'll also double-check by rotating the flywheel assembly around again. 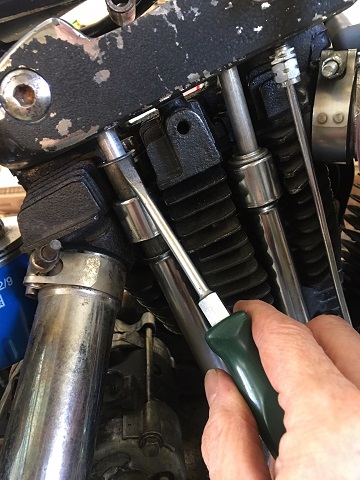 When reassembling the push rod covers, make sure that both upper tubes are seated into the cylinder head.

How Often Should Ironhead Valves Be Adjusted?

The factory service manual states that Ironhead valve adjustment should be done after 500 miles of initial engine break-in, then at 1,000 miles, and every 2,000 miles thereafter. 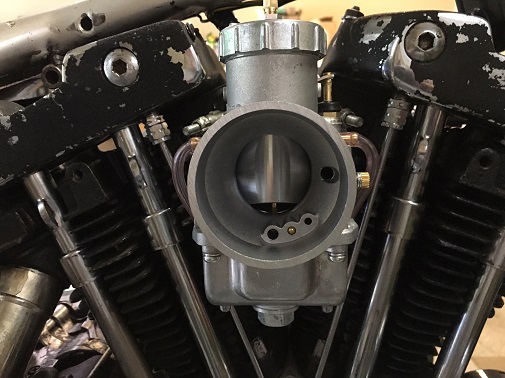