Up until the early 1970s, most motorcycles were kick-start only, but as more people began riding, electric-start became increasingly requested by newer riders. Eventually it became standard equipment on most street machines. 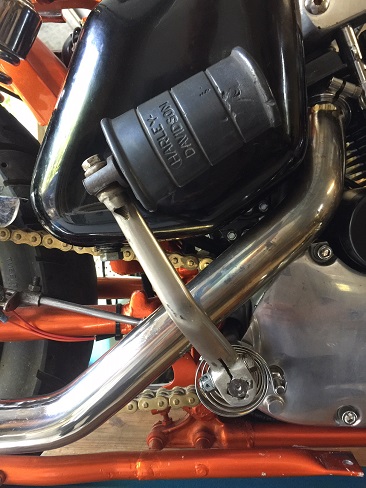 Part of owning a classic motorcycle is learning how to start your bike in as few kicks as possible. Although the techniques for kick-starting an old motorcycle are basically the same, every bike is a little different - even the same makes and models can be slightly different.

For an engine to start, it must have compression, spark, and fuel. Engine timing (when the valves open and close in relation to piston travel) needs to be correct, and of course, nothing damaged or broken in the motor.

Know Where The Compression Stroke Is

The four phases of a four-stroke gas engine are intake, compression, power, and exhaust. Top Dead Center is when the intake and exhaust valves are closed, and the #1 piston is coming up to compress the air/fuel mixture.

Before turning on the fuel and ignition switch, kick the bike over two or three times. This is to get the engine primed with oil. Then turn on the fuel valve, and the choke (or enrichener device), and finally, the ignition switch. Twist the throttle once or twice, find the compression stroke and kick. A motor in good tune should start in several kicks.

Motorcycles start easier once they're warmed up. Starting procedure would be fuel on, one or two twists on the throttle, ignition on and kick. No choke or enrichener should be needed. A well-tuned motor should start in a kick or two. 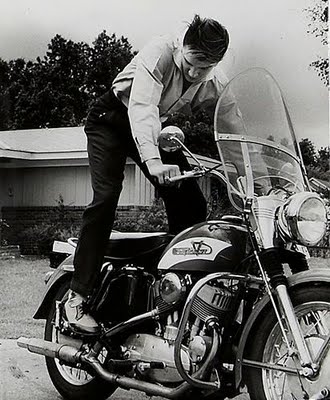 Standing Over Or Next To The Bike

A common position to kick start a motorcycle is standing next to it, but they can also be started while being straddled. To do this, put the bike on the kickstand, balance yourself with your left foot on the left foot-peg, and kick with your right foot. This kicking angle usually requires less effort.

For high-compression, big-displacement engines, you'll need to get more power into the kick. Try standing to the right of the bike using your left foot to kick. If you don't weigh much, it gives you better leverage to kick down with. When I was a teenager, this was the technique that helped me kick-start bikes that were bigger than I was!

You can also try resting your left knee up on the seat while kicking the bike over. This places all the weight from your left side "above the action", and if the engine were to kick back, you'd be more likely to be shoved upward instead of hyper-extending your right knee.

Keep The Bike In Tune

It's true - kick-only motorcycles are more finicky to start than an electric-start motorcycles. If your bike has ignition points, check the gap every few thousand miles. Take out the spark plugs, clean them and check the gap - perhaps try a wider gap.

If your motor is modified, it's very important to find a carburetor that works well on your bike. Back when I was riding my 1972 XLCH Sportster, other Harley riders used to mock my 40mm Mikuni carburetor because it was Japanese, but it worked well. To my delight and their surprise, the bike started consistently on the 1st or 2nd kick.

Kick-start-only bikes are lighter and less complicated than electric-start bikes.

If the Bike Still Doesn't Start

If the engine "spits" out the exhaust pipes while you're kicking, you're getting closer. but you may have flooded the motor by twisting the throttle too much. If you think you did, try holding the throttle all the way open when you kick.

To make sure you're getting gas, remove a spark plug and see if it looks wet or smells like gas. 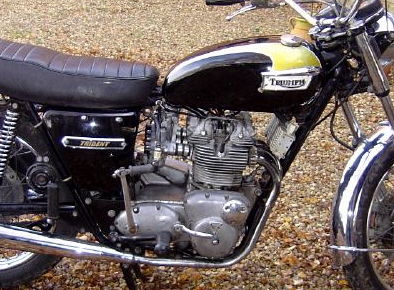 Since kickstart bikes don't rely on a battery for starting, it can be in pretty bad shape without you knowing. Check the battery cable connections, and also the fluid level. Top off with water if necessary, and allow to stand awhile before charging. Recharge it with a small amperage trickle charger overnight.

Chances are you won't be riding your classic bike for hours in hot weather, so a 60w or 50w grade of oil won't hurt the motor and will make the bike easier to kick. In winter months, you can run 20/50 oil to make starting easier

Starting a Motorcycle with Manual Advance

Many pre-1960's motorcycles did not have automatic timing advance. Usually it was controlled manually by a cable from the left-hand grip to the distributor.

To start a bike with a manual advance, such as an old Linkert-equipped Harley, try the following. With ignition off, turn the gas on, full choke, and retard the timer (twist left-hand grip). Give two full kicks, one click off on choke, then turn on the ignition switch. One good kick may start it. If it does, advance the distributor. Open the choke as soon as it warms up. 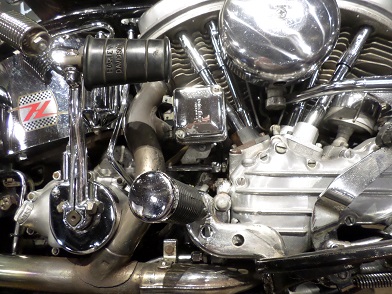 If it takes more than a dozen kicks to start your bike, look for another problem. Start at the spark plugs - if the plugs are wet, the motor is getting gas. To check for spark, you can either take off your points cover and see if the points are sparking, or remove one spark plug and ground it to the frame or engine. Then kick the bike slowly with the ignition switch on to see if you're getting spark.

Kick-starting an old motorcycle is part of classic bike culture. Hopefully some of these tips and techniques will help newer riders with older machines. Once starting procedures are learned, they become second-nature to you. And wear a good pair of boots - you should be anyway.