What many consider to be the coolest looking motorcycle of all time, the Panhead was manufactured by Harley-Davidson from 1948 through 1965. The engine's popularity and demand remained so strong, that 25 years after production ended, several aftermarket companies began producing replica Panhead engines. 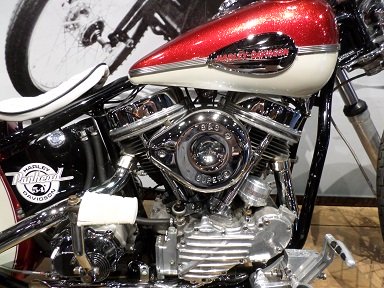 Although the Knucklehead was one of the Motor Company's crowning achievements, by the mid 1940's consumers were demanding more power. Harley engineers updated the Knuck's upper-end with aluminum heads which reduced operating temperatures, and added hydraulic valve lifters which reduced engine noise. The new heads were topped off by redesigned rocker covers which resembled upside-down roasting pans, prompting the nickname "Panhead."

The bottom end was basically unchanged from the Knucklehead, but the engine cases were modified for the new cylinders, and a new camshaft was designed to operate with the new valve system. 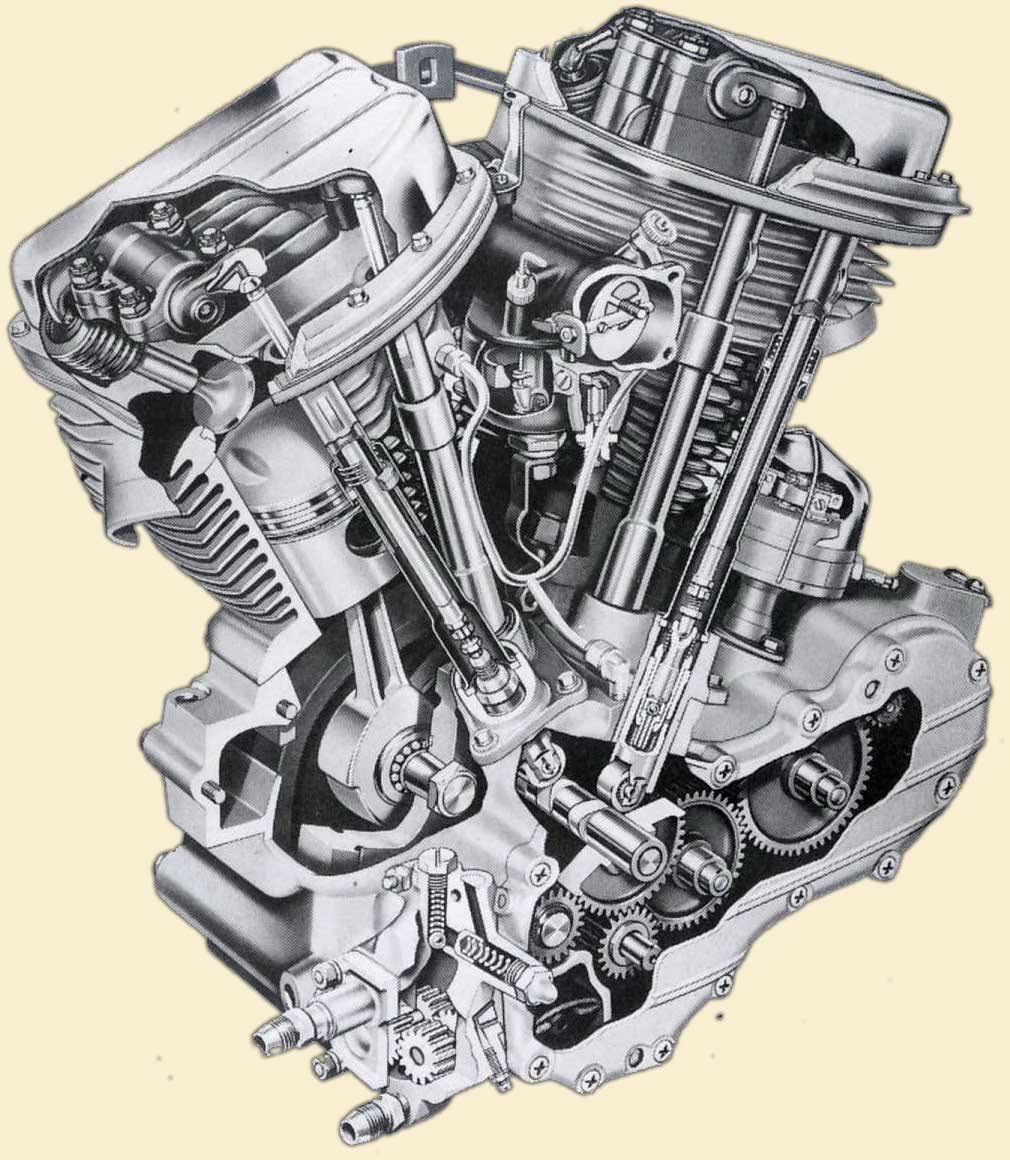 Total bike weight was around 565 pounds, and a stock Panhead had a top speed of about 100 miles per hour. Like the Knucklehead, the Pan was offered as either the EL (61 cubic-inches) or FL (74 cubic-inches).

To accommodate the new taller engine, the Panhead received a redesigned frame with double down-tubes. Designed with a mounting plate for engine-guards as well as a steering lock, it became known as the "wishbone" frame. Wheelbase was 59.5 inches.

The first year of the Panhead was also the last year of the springer (leading-link) front end for Harley Big-Twins. Color options included Flight Red, Azule Blue, and Black. Gas tank capacity was 3.75 gallons with a one-gallon oil capacity.

In 1949, the Harley-Davidson "Hydra-Glide" was first offered. Hydraulic fork tubes replaced the springer front end, nearly doubling the amount of wheel travel. Another update for 1949 was front brake drum diameter increased to eight-inches.

The Hydra-Glide was one of the first streamlined motorcycle designs, with teardrop shaped gas tanks and instrument cluster. Also new was a horizontal shielded front fender and chrome enclosed front forks. These all gave the Panhead a cleaner, more modern look. 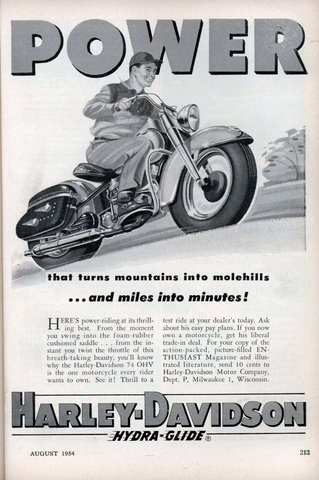 The hand-clutch/foot-shift option became available in 1952. Called the FLF, it took a few years to catch on, and many Panheads still left the factory with the foot-clutch/hand-shift setup well into the sixties. Hand-shift models were offered by Harley Big-Twin motorcycles through 1972.

A clutch booster, nicknamed the "mousetrap", was added to the Panhead to aid in hand-clutching. It was attached to the front left down-tube with a spring hidden by a vertical cover. These were known to be troublesome, and 'mousetrap eliminators' have been around for nearly as long as the mousetraps. 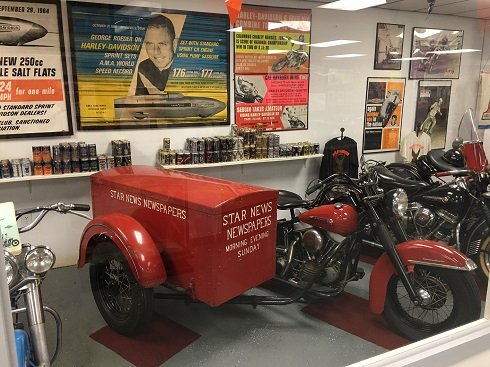 In 1953, valve lifters were moved from the top of the push rods to the bottom of the push rods. To reduce the likelihood of burnt exhaust valves, a rotating cap was placed between the valve stem and rocker. Internal modifications were made to the muffler, along with a name change from "Mellow-Tone" to "Low-Tone". 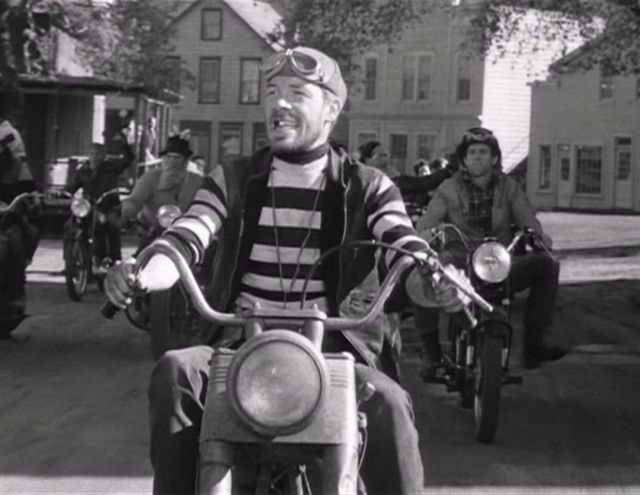 Brooks Stevens was an industrial designer, as well as a graphic designer and stylist. In addition to designing the 1954 Hydra-Glide, his diverse portfolio including the Edmilton Petipoint clothes iron (1941), Lawn Boy lawn mower (1954), and the Oscar Mayer Wienermobile (1958). As an automobile designer, Stevens worked at Studebaker during the company's last years, before going on to create and produce the Excalibur car.

The 1954 Hydra-Glide offered the buyer options such as two-tone paint and color-matched hand grips and kick-start pedal, increasing Panhead sales, which accounted for nearly half of all Harley-Davidsons sold in 1954.

In 1955, the Panhead's intake manifold, a carryover from the Knucklehead, was upgraded with O-ring style ports. The solid lifter/hydraulic push rod was switched to a solid push rod and a hydraulic lifter/tappet. Also this year, valve covers changed from 12-bolt to 6-bolt. This lasted for less than a year, and by late 1955 the 12-bolt cover was back to stay.

Mid-year saw the introduction of the FLH, which had a higher compression ratio and produced 60 horsepower.

The year 1958 is very significant in Harley Panhead history. First, it was the introduction of rear suspension on Big Twin models, making the Hydra-Glide the Duo-Glide. Second, the addition of hydraulic rear brakes (all earlier models had mechanical rear brakes). With a bike weighing nearly 700 pounds, the new brake system was much appreciated by riders.

Other improvements for 1958 were a new oil tank, as well as transmission and clutch upgrades. The engine's pinion shaft bearing was enlarged to 1.25" diameter. On the sprocket-shaft side, a Timken bearing replaced the earlier style. These make 1958 and up Panhead's a better platform for performance modifications. 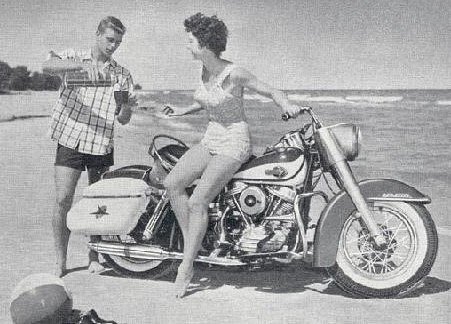 Over the next several years, minor improvements were seen, and in 1965 the last major step was taken.

In the Panhead's last year, the Big-Twin housed a 12-volt ignition system and an electric starter option. The left engine case was changed to accommodate the electric-start. This left case and primary cover were used up through the 1969 Shovelhead.

The Duo-Glide became the Electra Glide, a name that endures to this day. Initially, not all riders liked the electric start, as it added 50+ pounds of weight, making the bike about 10 mph slower at the top end. 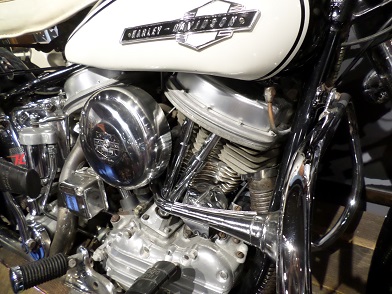 Also for 1965, the Harley Panhead engine came with an automatic-advance distributor, which can be retro-fitted to any earlier (1936 to 1969) 61" or 74" OHV Big-Twin. An optional 'King of the Highway' package included a chrome battery cover, chrome oil tank, directional signals, white saddlebags, and more.

All Harley-Davidson Panheads have the VIN located on left engine case. No frame number was used. The first two numbers are the year and letters (up to four) are the model designation. The last numbers are the production number. 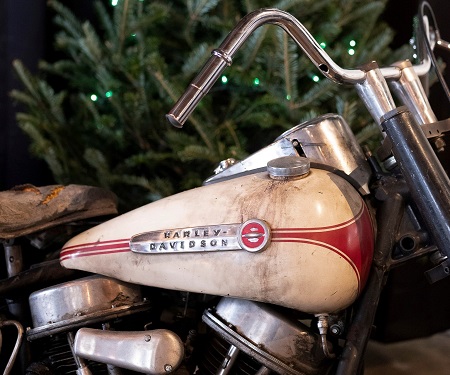 If you ride your Panhead more than 1,000 miles a year, one of the best upgrades you can make is installing a Cycle-Electric generator. Note: Many Panheads still have a foot-clutch, and for bikes so equipped you'll need to check for interference before installing a C-E generator. You may have to shim out the foot pedal to gain the clearance needed.

The Panhead was a good engine, but Harley riders continually requested more power, prompting the Motor Company to produce the Shovelhead starting in 1966.

Many riders retro-fitted their Panheads with Shovelhead cylinders and heads when they came out, which gave better air and exhaust flow. The swap required adding an outside oil line, as the Shovelhead crankcases were not drilled to match the holes in the cylinders. 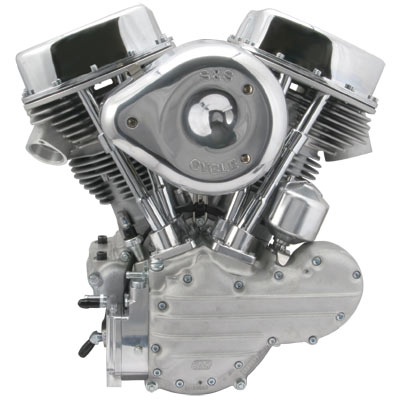 In the mid-nineties, S&S Cycle introduced their 'Evolution' style crankcases and cylinder heads. Several other companies entered the market, but interchangeability between different manufacturers parts became an issue. After S&S released their long blocks series, many builders switched to using all S&S products. Over the next several years, the line expanded, and engines are now offered in all stages, including completely assembled.

Offered by Panzer Motorcycle Works USA, the 'Neo-Pan' motor was built by Accurate Engineering exclusively for Panzer. The cases, wheels, rods, cylinders and pistons were from S&S Cycles. These motorcycles were built in the late nineties.

Two of the most recognizable custom Panheads are featured in the 1969 motion picture "Easy Rider", carrying actors Peter Fonda and Dennis Hopper on an odyssey eastward from Los Angeles to New Orleans.

The story goes that Fonda had purchased four used Panheads from a police auction; a 1950, two 1951's, and a 1952 model. Both the Captain America bike and the Billy Bike were designed and built by motorcycle builder Ben Hardy. Peter Fonda met Hardy when he built the bike Fonda rode in The Wild Angels (1966). Dennis Hopper is interviewed in the documentary "History of the Chopper" and confirms that it was Hardy who built the bikes. One of the people who worked on the bikes was Dan Haggerty, who later starred in the 1977 series 'The Life and Times of Grizzly Adams'.

Starting life as a 1952 Harley-Davidson Hydra-Glide, the Captain America bike retained its original Panhead engine, then mounted in a chromed frame with a raked and stretched front end, with upswept fishtail exhaust. Rounding out the classic chopper was an American flag gas tank and high-back sissy bar seat. 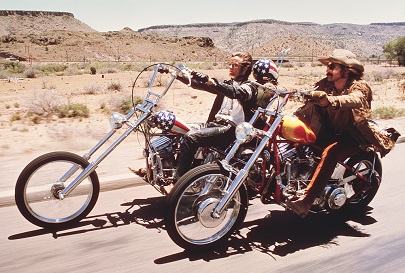 The Wild West-inspired "Billy Bike" was more conservative. It kept the stock brakes and fenders. The brake light and license mount were moved to a side mount, and tall risers put the drag bars closer to the rider.

Dozens, if not hundreds, of builders have made replicas of both Easy Rider bikes. The California Motorcycle Company owns the only Captain America replica that was endorsed by Peter Fonda.