There may be better or worse choices for a commuter bike, but in 1983, my choice was a Yamaha Seca Turbo. As you can see from the picture below, it got me through all kinds of weather. 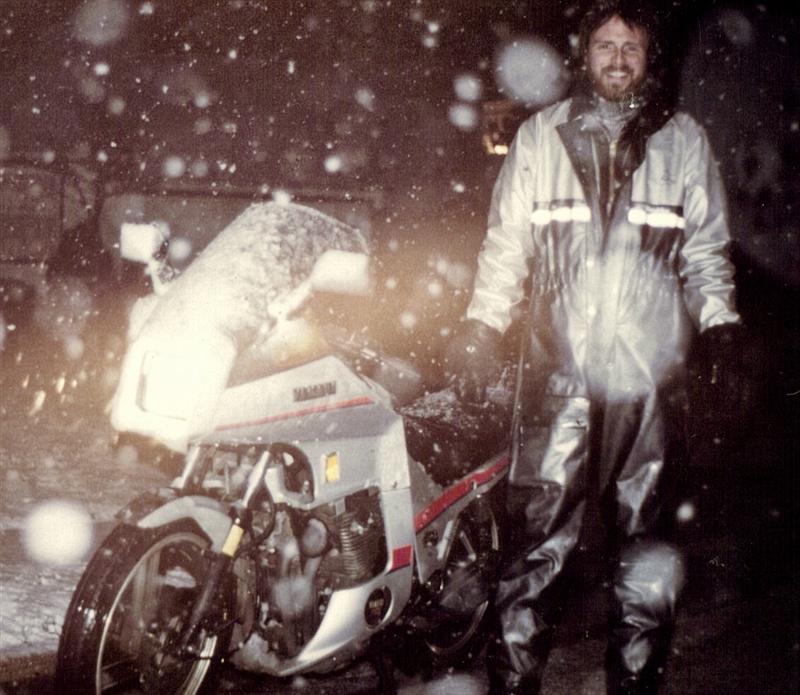 Offering the allure of 1000cc performance in a mid-size package, Yamaha was the second of the Japanese manufacturers to offer a turbo bike. Honda had been first with its liquid-cooled CX500 Turbo.

In the winter of 1982, I had decided to convert my 1972 Sportster into a custom hardtail. This meant I needed to find another daily rider. It didn't take me very long to find a second motorcycle to commute with. I saw a picture of the XJ650 Seca Turbo in a bike magazine, and shortly after, rode down to the local Yamaha dealership to inquire.

The Yamaha dealer didn't have one in stock, but after a deposit was put down, one arrived a week later. It was actually a left-over 1982 model, but the price was right. 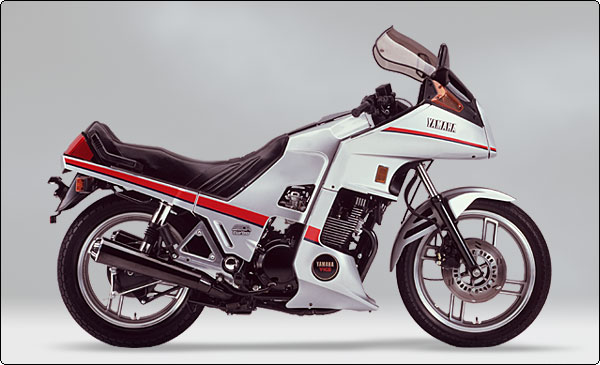 Several things appealed to me about this bike. First, the frame-mounted fairing and leg shields, which blended nicely into the seat/tail section, would offer a bit of protection from the elements without being unnecassarily bulky. Second, a shaft-drive motorcycle can endure bad weather better, as well as needing less maintenance than a chain-drive bike.

Introduced in 1980, the Yamaha XJ650 series was offered in two versions. First was the Maxim, a cruiser-style bike with high bars and stepped seat. A second model, the Seca, was a sport bike, and available only in the European market for the first year.

Sharing frames with the standard Seca, the XJ650 Turbo debuted in 1982. Front suspension was upgraded to air adjustable forks, with dual-disc front and a drum rear brake. Weight was 565 lbs, about 50 pounds more than the non-turbo Seca. Seat height was at 31 inches. 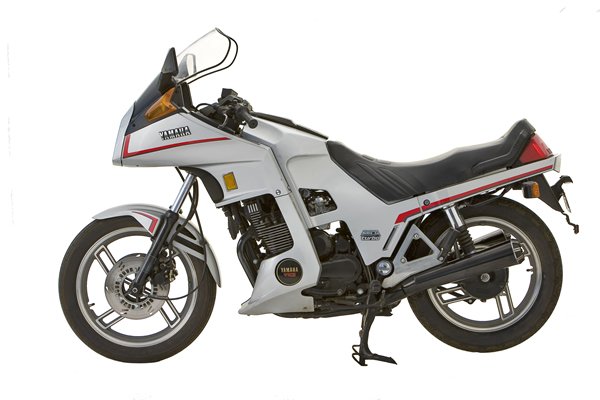 The engine was an air and oil cooled DOHC inline-four, and based on the standard Seca 650cc motor. Induction was through four pressurized Mikuni carburetors. To minimize width, the alternator and starter were placed behind the motor. The motor also featured the Yamaha Induction Control System (YICS).

Positioned behind the motor was the turbocharger, spinning at speeds up to 22,000 rpm. It was mounted just behind and beneath the engine, which gave the motorcycle a low center of gravity. Yamaha claimed their turbo unit was the world's smallest at the time. 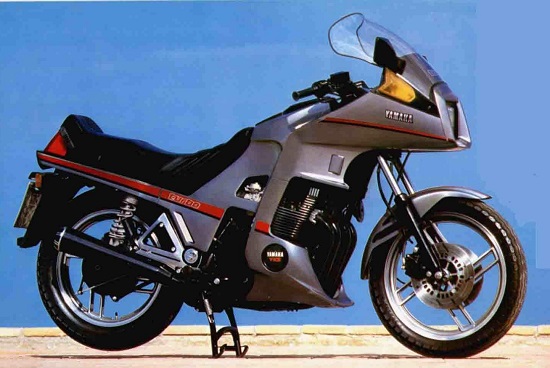 All XJ650 engines featured a pair of chain-driven overhead camshafts and a one-piece crankshaft. The turbo motor with stock boost (7 psi) produced 88.7 horsepower at 9000 rpm.

The dash instruments included a conventional tachometer and speedometer as well as a boost gauge. There were also LCD warning lights for low fuel, oil, battery and brake fluid, headlight and taillight failure, and side-stand retraction.

The fuel level was displayed by four rectangles, each signifying a quarter-tank of gas.

Riding below 6000 rpm, the Seca-Turbo feels like any other in-line four-cylinder bike. But twist the throttle and hold on--when the turbo kicks in, it launches you down the road.

Once you were moving and down-shifted, the power was amazing. At high revs with the turbo already spinning, the front wheel would lift when shifting from 2nd to 3rd. The five-speed transmission shifted flawlessly. 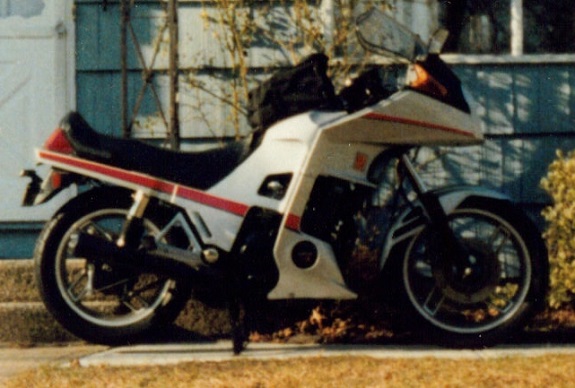 Although capable of twelve-second quarter-mile times, it wasn't designed for off-the-line acceleration. The final shaft drive certainly robbed the rear tire of power.

The 1983 models were given a little more boost at 12 psi, compared to the 7 psi of the 1982 models. Most dealers offered to add boost to the earlier model if the customer so desired. 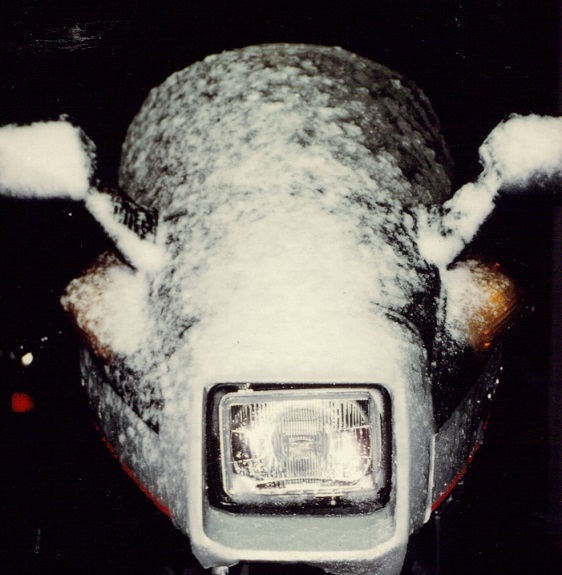 Turbo bikes never enjoyed mainstream popularity, they really weren't around long enough. Engineers were soon able to coax more power out of normally aspirated engines, which ended the need for the more expensive and complex turbochargers. Yamaha dropped the XJ Turbo series for 1984 in favor of their new FJ series bike.

During the time I owned the Seca Turbo, it shared the garage with my Hardtail Sportster. I thought nothing of alternatively riding right-hand shift and left-hand shift bikes. 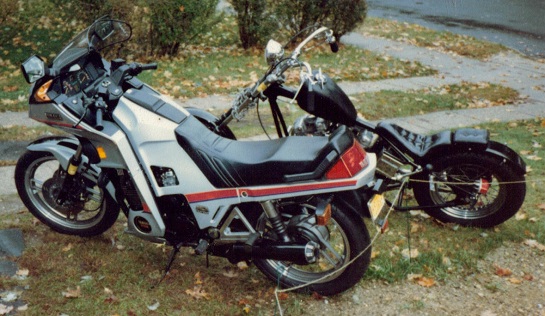 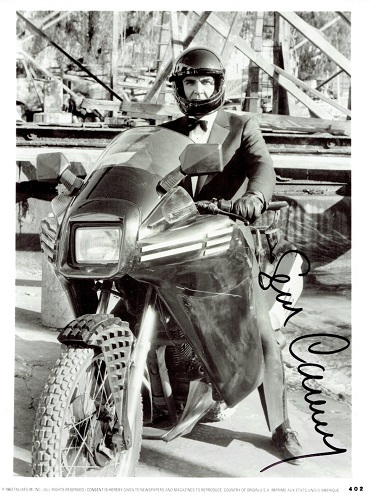