Two main reasons for converting a motorcycle from electronic to points ignition are cost and simplicity. Although there is no performance advantage, you'll be adding old school style and attitude. 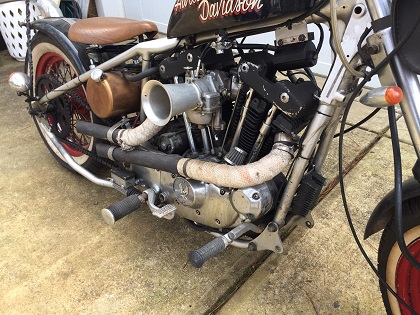 The following article shows how we retro-fitted points ignition onto a 1981 Ironhead Sportster. The procedure is basically the same for all 1978 through 1995 Sportsters and late-78 through 1995 Big-Twins. 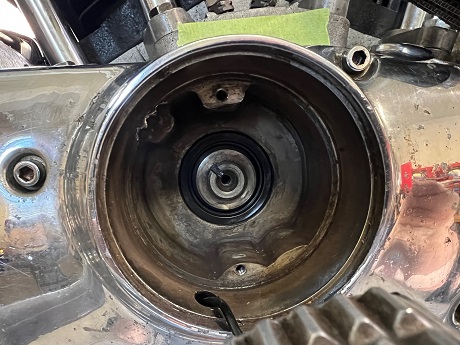 This bike showed up non-running with the sensor assembly and wiring already removed.

Since the mid 1960's, Harley points ignition worked with a mechanical advance unit, which has spring-held weights that don't move until the motor is off idle. Above that, engine speed forces the weights outward, which causes the timing to advance. When the weights come back to rest, the ignition timer goes back to the retard position. 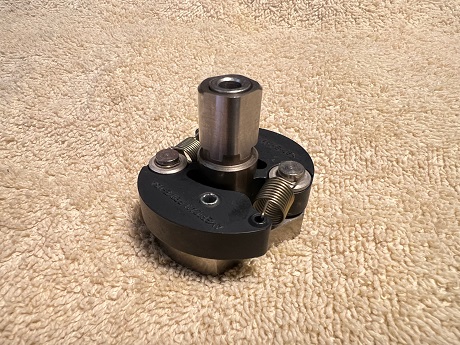 Install the mechanical advance into the housing. 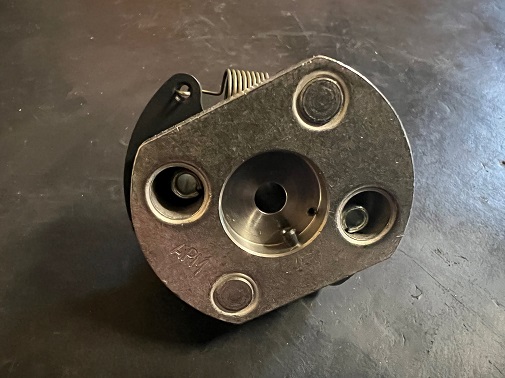 A small roll pin on the back fits into the engine cam slot. 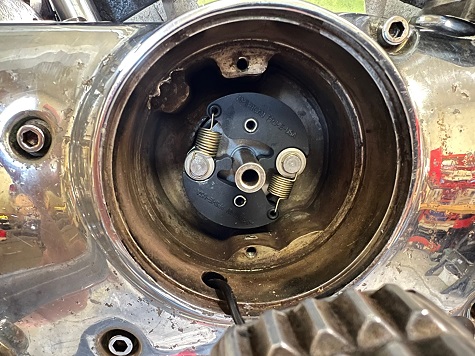 The 10-32 x 2" bolt with the 9/16" head goes through the circuit breaker cam and then threads into the rear intake cam.

DO NOT OVER-TIGHTEN BOLT - torque to 12-15 inch/pounds only! 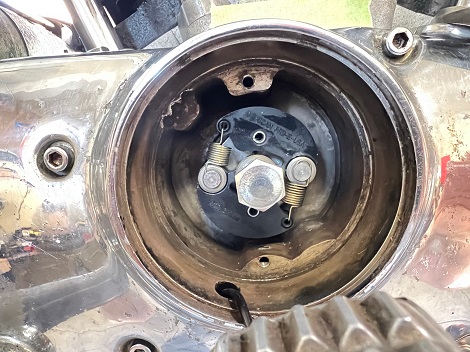 You can add a drop of Loctite to the threads.

The points plate, or ignition plate, was taken from an old parts bike. The factory service manual refers to the two threaded studs as "standoffs". 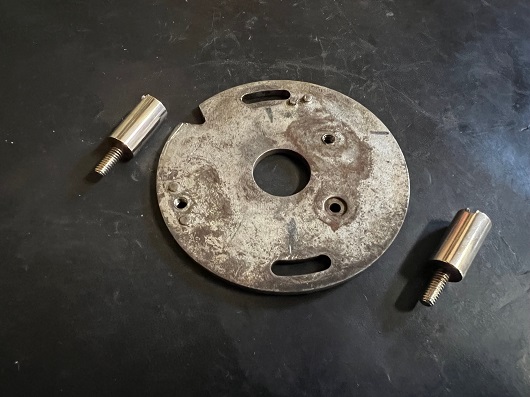 Install points and condenser. Apply a very small amount of cam lube or something similar to the rubbing block. 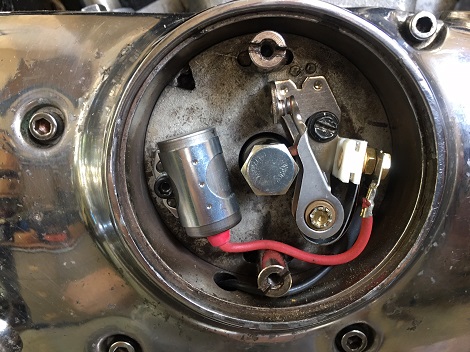 Note the "V" notching on the point plate at the 10:00 position. This will be used later (with a flat-blade screwdriver) when static-timing the engine.

You can salvage a piece of wire from the old harness, or buy a roll of 14 gauge wire along with a pack of 14-16 eyelet terminals. 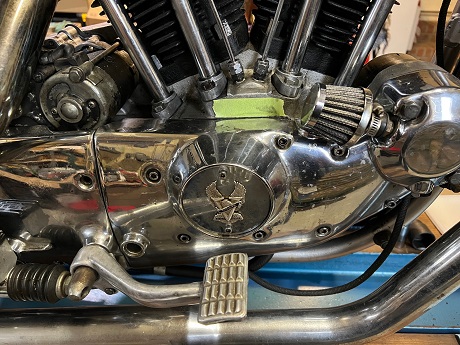 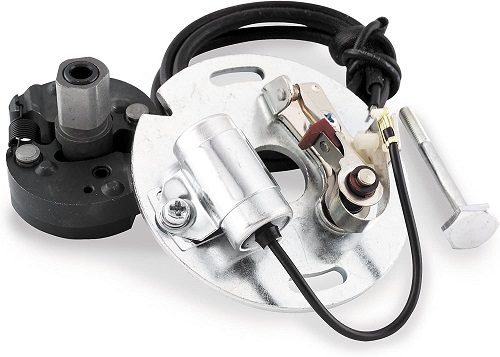 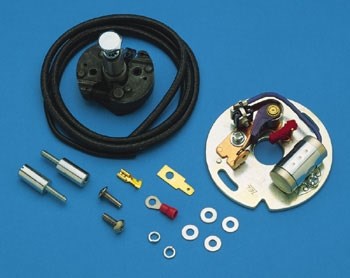 Remove the timing mark sight plug on the left-side engine case. Points should be set with the motor on the advance timing mark.

For non-kick start bikes, you can raise the rear wheel off the ground an inch or two, then with the bike in gear, turn the rear tire by hand. This will allow you to slowly move the flywheel assembly. As they rotate counter-clockwise, the advance mark comes up before top dead center.

Timing is adjusted by loosening the two standoffs and moving the points plate to the left or right.

On 1971 to 1979 Ironheads, the advance timing mark is a straight vertical line. Do not confuse this mark with the single dot--that is top dead center (TDC) for the front cylinder. 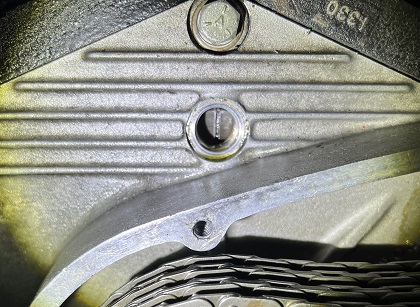 NOTE: The circuit breaker cam has a wide side (front cylinder) and a thin side (rear cylinder). Points are easiest to set when on the wider cam. 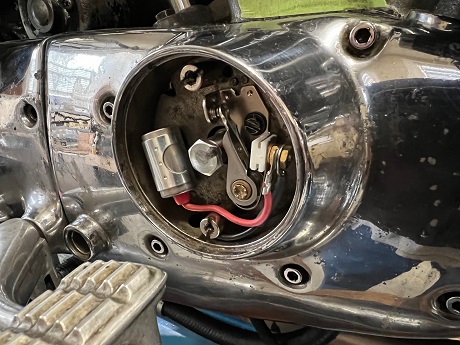 We've all heard stories of people setting points with a matchbook cover, but here in the 21st Century, a feeler gauge is a fairly common tool (and far more accurate). 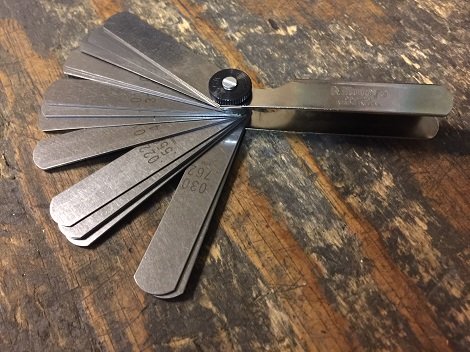 Sometimes you don't have to, but sometimes it will be necessary to lightly tap the points cam with a hammer to get both sides at the same gap. This is a scary thing to do, so use a small hammer!

When you think you have both gaps even, re-check them. 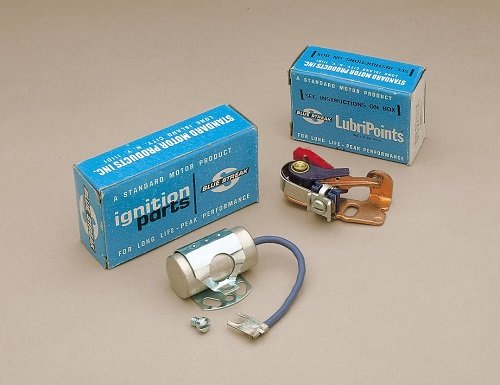 After converting from electronic to points ignition, you may want to re-gap your plugs to the factory suggested setting for pre-1978 models, which is 030" to 035".

To pass emissions requirements, many Harley Big-Twin and Sportster carburetors were factory-sealed to run lean. They cannot be adjusted.

If you are running a stock carburetor that has the mixture screws plugged, you may encounter a fuel/air issue after switching from electronic ignition to points. Re-timing the engine may help.

Unlike electronic modules, ignition points don't just go bad, but they do wear out from use.

Once properly set, a points ignition system will run fine for 10,000 to 15,000 miles, without any adjustment. For a classic motorcycle that gets ridden a couple thousand miles a year, that's a pretty trouble-free system! 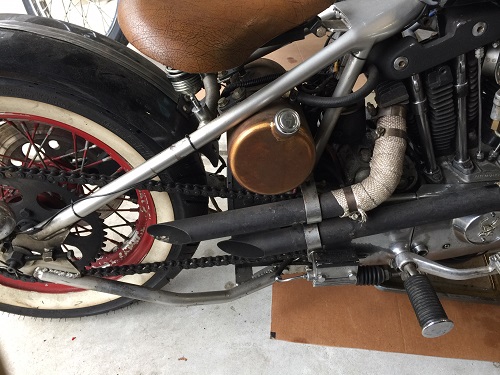